Happy Nick's Birthday everyone! Well, it has been exactly 1 week since we made our announcement and we already have our first submission!! Whooo hoooo!!! This one comes from a good friend to the Noisy Girls, Emma, or as we like to call her, Queen of the Darkside! (She runs TDS, our favorite forum)

We were in the hotel bar after a show in Manchester, UK and AJ came wandering in! He sat behind us and was chatting with some fans....
I was trying to be Stealth (like D) and was leaning back trying to listen in (think James Bond spy styleeee) When my other girls started laughing and suddenly AJ shouted loudly right in my ear!!!! *cue me shatting myself*
He had crept up behind me and decided to scare me to death!

I went a shade of beetroot and then ...... (probably instinct) slapped him hard on the arm and told him I hated him!! lols. My girls found it amusing and he just laughed like a total (gorgeous) bastard!

He then sat with us for a bit, chatting, showing us pics of his dogs on his phone and telling us how he'd been working out! Concluding the chat with asking to feel how hard his abs were!

So naturally I gave them a good feel!!! hahahahah It. Was. Awesome. My fave experience with a BSB and he totally knew what he was doing to get us excited!! lols!

He's a sneaky one that AJ!!

Did you love this story as much as we did? Do you have one of your own? Send it to us!! We'd love to post YOUR funny BSB encounter or amusing Backstreet related stories. See you next week!! :)

No comments:
Email ThisBlogThis!Share to TwitterShare to FacebookShare to Pinterest


To quote Brian (although, really, it should be AJ, but we all know Brian says it way more than AJ) “OMG, We’re back again!!”

The Backstreet Noise Project has had to be put on the backburner for a lot of us Noisy Girls and as much as we’d love to continue to come up with and write hilarious (or at least what we deem to be hilarious) pieces for the site, life just seems to have gotten in the way, kids, careers, bill paying... you know all the boring stuff. So we had an idea …

We Noisys are attempting to revive our little blog, in honour of the big, looming, 20th anniversary, and of course, to keep their fans smiling as best we can. However, we’re going to need your help! 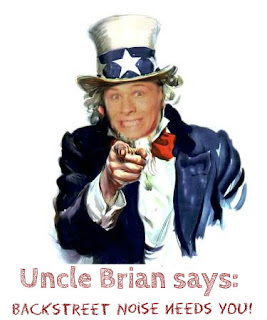 As funny as we may try to be, I think we can all agree that the best and the funniest stories come from BSB adventures. Sure, we can share those stories with our family and friends, but no one can really appreciate them like other BSB fans. And with the 20th anniversary year coming up, there’s gonna be a ton of events and who knows what kinda crazy stuff could happen.  So what we’re hoping is that you guys will share your stories with us, we’ll post them on the blog, and everyone can have a good laugh. And if we can get stories from a whole bunch of different events this year, it’ll be a nice way to commemorate the boys’ 20th anniversary.

What we’re looking for is this: funny stories, either involving BSB or BSB related, from your BSB adventures. Obviously nothing too long, we don’t want reviews, and the stories have to be real ie. it had to actually happen to you, no fan fic. We are also not suggesting we go down the BSB secrets route ladies and gents, y’all know what we mean… that makes us laugh in a different kinda way, normally before becoming quite aggravated. To make it clear, we’ll provide you all with an example …

Way back in 2010 during the This Is Us tour, you may recall that a few of us Noisy Girls met up in Cleveland, Ohio to hang out and to see the boys’ show. After the concert we decided to hang out near the tour buses and see if we could see the guys one last time. So we head over to where the tour buses would be and … what luck … there they were, the buses, out in the open, you could walk right up to them, which is just what we did. Now there was no one around and we were a bit sleep deprived, so we thought it would be cool to take pics with the boys bus, touch the boys bus, pretend to lick the boys bus, and one of us, who shall remain nameless but is definitely NOT me, decided to hump the boys bus. There is even photographic evidence of this. We all had a good laugh and the story would have been amusing enough at that but, unfortunately, it’s not over. We continued to wait for those damn Backstreet Boys while they were evidently having cake … without forks. You need forks to eat cake.  Naturally, that’s what a couple of the DANCERS ran over to THIER bus… The bus that SOMEONE mistakenly just humped thinking it was the boys. Oh dear…

Now our story doesn’t include any names because it didn’t really need any, but we did check with all the people involved to make sure it was cool with them before we shared it. So if you’d like to share your story with us and other fans, do us a favor and do the same. Check with your friends, especially if you’re gonna use their names, and make sure they’re ok with you sending the story. We don’t wanna have to take stories down because of complaints.

Now we don’t know when the next BSB event will be for this year, so for now, to get the ball rolling, we’ll take any stories you have from past BSB events. We’re hoping you’ll all help us out by sharing your experiences and spreading the word. We want people to think of us when these kind of moments happen. Sort of like a “Damn You Autocorrect” thing. Something funny happens on the tour or the cruise or any other event we want people to think “this is a Backstreet Noise Project moment”.

So do you have a funny BSB adventure? Send it to us at backstreetnoiseproject@yahoo.com  because what happens on tour (or cruise, event, small stalking expedition, lol) doesn’t have to STAY on tour… ;)
No comments:
Email ThisBlogThis!Share to TwitterShare to FacebookShare to Pinterest
Newer Posts Older Posts Home
Subscribe to: Posts (Atom)