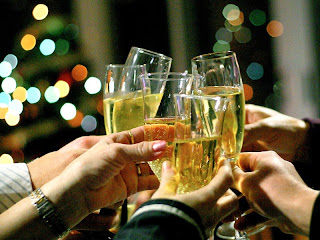 Well today is a special day, its our second anniversary! Its been a year of ups and downs, highs and lows, anyone would think AJ was our driver!

But we're still heeeeeeeeeeeeeere!
Our feet stuck to the ground,
despite how silly we sound!

We still are DD, Momma J, Sam, Chels, Luz, Poppy, B and V! And thank YOU! Yep, YOU! Because if you were not here reading this craziness we would have to do something else that was crazy and we would all end up in the loony bin LOL You are indeed... bigger than us.We know we've been a lil quiet recently, feel free to blame Nick, we do. But we are working on something pretty damn good! Here's a lil teaser for you... keep checking the blog... this is gonna be epic.Much Love,V and the Noisy Girls xoxo

10AM Backstreet time Somewhere of the coast of Miami:
Howie pointed over into the corner of the room,
“Look I told you… what the hell is that all about?”
Brian and AJ slowly approached the tape recorder placed on Howie’s bed; someone had scrawled “PLAY ME!” on a piece of paper next to it.
“I guess we should play it” Shrugged AJ pressing the play button
“YO D! BRok! AJ! Your mission should you choose to expect it is A BACKSTREET SCAVENGER HUNT!”
It was Nick.
Howie looked at Brian“Expect it?”
Brian shrugged “resign/reside he’s always had issues”
Nick continued as the music from Mission impossible accompanied him in the back ground,
“You are going to need to find five things that re-SIDE on the ship and meet back here at eight o’clock TONIGHT! This is gonna be awesome! OK the five items you must collect are:Number one… A Wylee item”
Brian fist pumped “I have SO won this already”
“What?!” exclaimed Howie
“you are actually considering doing this?”
“Sssssssssshhhhh!” said AJ “we need to listen to Nick”
“Number two… A 42DDD bra”
“Woaaaah” groaned Brian “I like this game”
“Number three… you must take a picture with the craziest fan you can find”
AJ laughed “We need a Nick fan then”
“Number four… A tampon…. In like the packaging obviously”
Nick lost control and laughed for three minutes straight“Bwhahahahahhaahahah… oh sorry…. Bwhaaahahahaa…. tampon”
The boys looked at each other in confusion, Nick was now mumbling through tears of laughter
“Oh man… yeah… that’s funny! A tampon…. yeah”
Finally he snapped out of it
“OK finally! Number five! A fluffy bunny!”
“That’s a hard one” said Brian shaking his head
"Yeah man" AJ nodded in agreement
“WHAT!?” cried Howie in confusion “This is a cruise ship not a petting zoo Nick!”
“Use your imagination with that one hahahaha! Ok dawgs this tape will self destruct in 10… 9…. 8….”
“This cant be serious” sighed Howie rolling his eyes
“7… 6… 5…”
AJ started backing away “I really think we need to MOVE”
“4… 3…. 2…”
“Oh lord” Brian sighed
“OOOOOOOONNNNNNNNNNEEEEEE!!!!!!!!!”
BAAAAAAAAAAAAAAAAAAAAANG!
The tape recorder exploded on Howie's bed… leaving a big black scorch mark.
“MY BED!” yelled Howie
“GAME ON! GOTTA GOOOOOOO!” shrieked Brian leaping into the air and running out of the room. A shocked Howie looked at AJ for some kind of sane response; AJ was slowly backing out of the door
“Listen… Howie… sorry about your bed man but I’m gonna WIN this! Later dude”
Howie stood alone for a minute wondering how Nick had got explosives onto the boat and who had let him have them in the first place. He looked at his burnt bed and shook his head.
“Well…” He said to himself as he walked out of the door
“If you can’t beat them… join them right?”