We've got it going on video review

Welcoming back our vid reiviews! Some of you may already know and love them, other of you may be going... huh? Either way here We've got it going on for your reading enjoyment, link to video under picture.
So... which one will follow next week? Only one way to find out... stay tuned... ENJOY :) 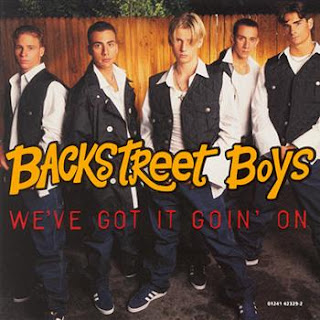 Ok so we are going way back here! To 1995 to be exact! We have some very young Backstreet action going on here!

0:00 - 1:00
We start off with the boys in a Radio station, DJs must have become more closed-minded these days obviously because it appears they have actually been invited!
Oh and theres five of them! oh yes! Brian starts goofing around and dancing as the lady introduces them, nice to see he hasnt changed.
Howie is standing next to him and looks like a rabbit caught in some car headlights (a very handsome rabbit). They all introduce themselves one by one and from first view we can see that Brian calls himself the Brokster, Howie speaks spanish, Nick is very young and hasnt washed his hair for a few days, AJ much prefers the J part of his name and it appears Kevin may have just had a few beers to steady his nerves.
Then.... Cue the Video.... which they enjoyed, very much!

They're in a room standing next to microphones... there's a lot of hand waving and baggy BAGGY clothes going on here and what appears to be an exercise bicycle in the right hand corner of the room or at least some sort of gym equipment?!
I can only assume this is what they put Brian on between takes to wear him out and stop him bouncing off the walls and getting all hyper.

Then they are on stage, the clothes are again baggy, now I'm wondering if they are all wearing Kevin's clothes?
What happened guys?
Did the rest of you lose your suitcases at the airport?
Did someone steal all of your clothes and perhaps leave you nude?

That's quite an interesting thought, but I'm getting off topic.
The dancing isn't bad: AJ's out front with Howie giving it his all, but I'm still kinda lost in the baggy Sweater with flailing sleeves that appear to have a life of their own.

Howie looks like he's about to go jogging as he struts across the screen in the first shot. Oh, then we get an outside shot with the guys, Brian makes a gesture as if he is about to take flight, very superman, perhaps its time for a go of the gym equipment? However, they are wearing yet more of Kevin's wardrobe.
Kev mate, just take charge! Tell them they are all taking the ****, the clothes are too big, they all look silly and demand your clothes back.

At the end of the first minute, it appears Brian has had to be calmed down yet again between takes as theres a shot of him with part of a set of weights next to him, I guess this was a kinder option than sedating him.
Suddenly Nick and Brian are washing a car! Nick has his hat on sideways, that is sooooo cool dude! Nick gestures at the pretty lady washing the window screen, Brian reminds him he is underage. Then Brian's standing by a motorcycle looking all angry as AJ walks along behind him like ape that has soiled his underpants.

They then appear to retreat into some bushes/trees, perhaps this is so AJ can relieve himself after the soiled underpants. They play a little basket ball then start dancing around underneath a ceiling fan, please boys, stop waving your arms above your head!
Do you not have a Health and Safety representative on set? Obviously he left with your stylist: leather waistcoats over denim shirts????? What were they thinking?

Brian's basketball skills appear to have impressed the lady he conned into washing his jeep-- she sprays him in the face with the hose. This video is quite action packed because they then begin a game of pool!


2:00-3:10
Lots more dancing around in the leather and denim combo and then AJ puts his money where his mouth is and bets on the pool game, a lady promptly picks up is money and sticks it down her bra... what a classy bird!

Kevin meanwhile is weight lifting and pouring water over himself, AJ takes a shot at the pool table that even my grandmother couldn't miss and Howie's doing his best Patrick Swayze impression and having a bit of a dirty dance, Howie you are a dark horse!

Kevin then commits grand theft auto by "borrowing" one of the motorcycles and riding around with a lady for all of a second or two. Kevin is rather busy in this section of the video, particularly with dancing (around 2:35 he appears to be waving a plane in to land, despite the fact hes inside).

Whilst this is going on Kevin gets on the phone and appears to ring Brian on his mobile... from the same room, while Howie plays video games? (and people complained the "Straight Through My Heart" video makes NO sense lol).


3:10 - End
Around 3:10ish the boys appear to start doing some ritualistic rain dance with their elbows.

The dancing kicks up a gear, and it's a basket ball themed dance. Yay some hot booty shaking Backstreet action!
AJ wins his pool game and gets his money back, I'm still astonished by the amount of hair he has...I mean had.
They continue to dance around under the ceiling fan, this is NOT "The Perfect Fan" so don't come crying to me if you lose fingers!

Then it's all over, by the motorcycles.
Now I see why the Radio stations dont invite them back, they get a lil side tracked! lol